The minimum wage will increase again to $9.87 in one year, at the beginning of 2021. For more information and guidelines about Michigan's minimum wage, visit the Michigan Department of Labor and Economic Opportunity.

Michigan's minimum wage has been in the news throughout the past two years, as a citizens group pushed for a higher wage via petition, and the state legislature halted those efforts. Business groups opposed the citizen measure, saying it would be too expensive.

The citizen-backed initiative had called for an initial $10 per hour minimum wage. That proposal was signed by more than 370,000 state residents, certified by the state Board of Canvassers in July 2018 and subsequently adopted by the state legislature, keeping it from being placed on the ballot in November 2018.

The Michigan Legislature then amended their action on Dec. 4, 2018, effectively reducing the proposed increase and reversing the initiative's intent. The initiative had called for initially raising the minimum wage to $10 per hour in 2019 with a rise to $12 per hour by 2022.

Legislators asked the Michigan Supreme Court to rule whether their action was valid. The court heard arguments on the case last July, but declined to rule on the case in December 2019.

Other states are increasing the minimum wage in 2020. They include: 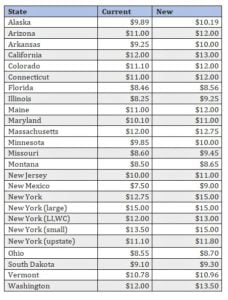 Do you need assistance as you design your wage structure and policies? The experts at BCN Services are here to help. Contact us for assistance.

2020 can mean a profitable approach for your business New, finalized W-4 form available for 2020